ABOUT THE TOPAZ MUSEUM 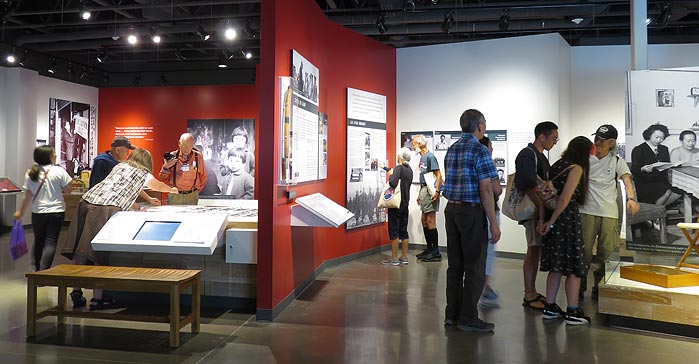 “To preserve the Topaz site and its World War II history; to interpret the impact of Topaz on the internees, their families, and the citizens of Millard County; and to educate the public in order to prevent a recurrence of a similar denial of American civil rights.”

Overseeing the design and construction of the Topaz Museum. Board members include: Jane Beckwith, Scott Bassett, Hisashi Bill Sugaya, Rick Okabe, Lorelei Draper, Lance Atkinson, and Teresa Thompson. Steve Koga and Grace Oshita were valued members of the board. Ann Tamaki Dion heads a Friends of Topaz group in the Bay Area.

Although Topaz opened on Sept. 11, 1942, many barracks as well as the schools were not competed until after October. In fact, the Japanese American internees were hired to install the sheetrock and erect the four-foot high barbed wire fence around the site. Since April 1942, internees had been living in Santa Anita and the Tanforan race track in San Bruno, where many were housed in horse stalls — hastily whitewashed, but retaining the grim reminders of the former equine inhabitants. From those temporary quarters the internees were transported by train to Delta, Utah, to begin their lives in Topaz. Over 11,000 people were processed through the camp during its duration. At any one time the population of the camp was about 8300.

Internees arrive at Topaz with only what they could carry.

Two elementary schools, one junior/senior high school, gymnasium, and a hospital constituted the major structures of the camp. Administration buildings, warehouses and government workers’ housing were located in the first few blocks of the forty-two block camp. The remaining blocks were for internee housing and playground areas.

Each block had twelve barracks, a recreation hall, latrines for men and women, and a mess hall. The barracks were sectioned into six areas of different sizes to accommodate families of two, four or more people. Larger families were given two or more rooms.

Living areas were heated by coal stoves, but cooking in the residential area was discouraged. The rooms had no running water. Furniture for the apartments only included army cots, mattresses, and blankets. Some residents constructed tables, chairs, and shelves out of scrap lumber left lying around the camp. The barracks, crudely constructed of pine planks covered with tarpaper as the only insulation and sheetrock on the inside, provided little protection against the extreme weather of the semi-arid climate. The first killing frost was recorded the end of September 1942 and the first snowfall was on October 13. Some of the barracks still had no windows installed at that time. School children took their benches outside to sit in the sun until their classrooms were finished. The winter temperatures in the area typically hover near or below zero, and in the summer soar above the nineties.

Internees were employed at different jobs around the camp such as farming, teaching, cooking, or clerking in various offices. They were paid wages ranging from $14 for secretaries, $16 for teachers, to $19 a month for doctors and other professionals. American soldiers were being paid $21 per month and the War Relocation Authority did not want to exceed that amount for internee wages.

Residents could obtain passes to shop in nearby Delta. Some found employment in the community. One man who worked at the local newspaper was subsequently charged “rent” at camp because he was paid more than the internees who worked inside the barbed wire.

On April 11, 1943, James Wakasa, age 63, was shot and killed by a guard when he was near the southwest section of the fence. After an outcry from the camp population, guarding procedures changed.

Gardens were a means of maintaining some semblance of normalcy.

On January 29, 1943 President Franklin D. Roosevelt announced that volunteers would be accepted in an all-Japanese American combat unit. At about that time, residents seventeen years of age and older in all the camps were given a questionnaire to determine if they were loyal to the United States. The two-question test became sore points for more than just the first-generation Japanese who were not permitted citizenship in the United States as dictated by legislation. The first controversial question “Are you willing to serve in the armed forces of the United States on combat duty wherever ordered?” was followed by the second, “Will you swear unqualified allegiance to the United States of America and faithfully defend the United States from any or all attack by foreign or domestic forces, and foreswear any form of allegiance or obedience to the Japanese emperor, to any other foreign government, power or organization?”

Since the Issei, or first-generation Japanese, were denied citizenship in the United States, answering “yes” to the second question could leave them without a country. After a protest by many residents, the questions were altered; but damage had been done. Some became “No No boys” by answering “No” to both of the controversial questions. Dissidents from all ten relocation camps who answered “No No” were sent to the camp in Tule Lake, California. Of those qualifying for military service by answering “Yes Yes,” 105 volunteers soon left Topaz for active duty, with more following later.

Camp life at Topaz settled down and residents continued the routine of cultivating gardens, attending classes at school or in the recreation halls, and working. The art school grew with 600 students, taught by artists who had established reputations prior to the war. Residents were encouraged to leave camp and move farther inland. People could go to college or find work as long as they didn’t return to the West Coast.

President Roosevelt announced in 1944 that the camps would close in 1945 and then people could return to their California homes. That same year the Supreme Court ruled against Gordon Hirabayashi, Min Yasui, and Fred Korematsu, but in favor of Mitsuye Endo.

The Topaz camp didn’t close until October 31, 1945. The buildings were then dismantled or were moved to other locations, leaving cindered roads, foundations of the latrines and mess halls, rock gardens, and an episode that sullied the history of American democracy and its Constitution.

In 1976 the Japanese American Citizen League erected a monument near the site of the camp. On August 10, 1988, President Ronald Reagan signed a redress bill into law, issuing an apology to those interned and calling on Congress to budget compensation for the survivors. In 2007 the Topaz site was listed as a National Historic Landmark by the National Park Service. The Topaz Museum opened in 2017 with its interpretive exhibits.